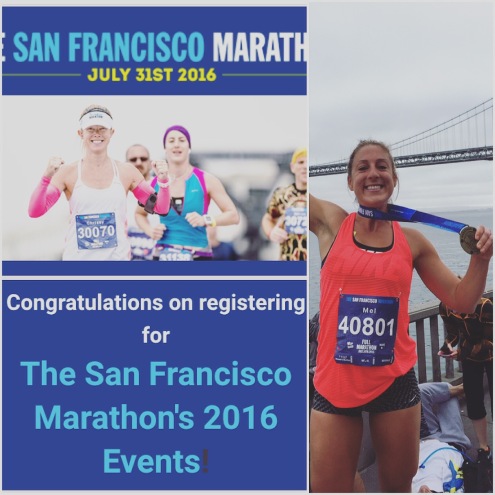 Last minute decision but it is official and I am so excited!!

You can think of it as a one year “marathon-iversary” celebration…and a costly one at that!  Last year in San Francisco, I had such a great time exploring the beautiful city, kicking my feet up and reading by the Pier, jumping into a few yoga classes, spending dinners and nights catching up with my best friend from college….oh and ran my first marathon!

It was a race-cation like no other.  I could not imagine my first marathon being any better. That weekend – specifically that race – ignited a love and passion for that distance and I made it pretty clear by running 3 marathons in the past 10 months.  I may have said countless times during those training cycles, “after this marathon I am going to take it easy, put running on the back burner and focus on crossfit“. I technically have done that after each race, but it didn’t not take much time for me to get anxious and want to tackle another marathon soon after.  I truly just love the distance and the long training runs on Sundays that leave you feeling tired but so happy and proud.

If you have read my blog, you know by now that I don’t have a coach and my training is more sporadic and unstructured than probably any other runner training for a marathon.  However, there is actually a method behind the madness.  I have been running for many years now and I have found that I do best when I have autonomy in my workouts. I hate the on this day you will do THIS type schedule because I am doing it because I have to and not because I want to.  I am not willing to give up my crossfit and my yoga to just run. I would rather be an all-around athlete.  To be honest, it was actually worked out best for me.  My fastest times have been when I am balancing running, crossfit and yoga.  On the flip side, I have had some pretty slow times because I didn’t properly balance all 3 and showed up to the starting line fatigued and tired.  But with each successful race and each awful race, I learn something that is carried with me and helps improve in the future.

Anyways, behind my nonexistent training plan there is actually some hidden consistency because I am definitely a creature of habit and like structure.  The structure is what allows me to make last minute decisions to jump in different races or competitions..and maybe even marathons. Even when I am not training for a race, I like having sundays as long run days.  I like going to morning crossfit on Monday (depending on how long my long run was), Wednesday and Thursday morning and Tuesday afternoon, I like the hot yoga instructor on Monday nights, I like fitting in 1 or 2 shorter runs mid-week and I like having my rest days on Friday. Yes, I can deviate from this schedule if need be, but I find myself conforming right back to it. That being said, sometimes I have conformed to this structure when all my body wanted was an extra day off and a break from it all.  This was a lesson I learned recently and have decided that maybe a morning at Crossfit consists of just mobility and stretching.  This allows me to stick to the schedule but give my body extra TLC rather than continue to break it down!

With all of that being said, my long run Sundays have been happening over the past few weeks so when I started thinking about going back to San Francisco (after allllllll the email reminders), it wasn’t some crazy, impossible..maybe just a little… task even though it was only a month away. Well at least the running didn’t feel impossible, paying for it all DID!!! I would never suggest jumping from 14 to 16 to 19 to 21 like I did, but I have done it before and I figured I would do it again.

So this 21 miler…. I asked around looking for a running buddy that would be willing to jump in for 6-10 of my 20 miles I had planned.  No luck. I have never done a solo 20 miler so I began to slightly panic.. even though I have done multiple 16-18 solo runs and would be JUST fine doing 2-3 more.  I jumped online Saturday morning looking to see if there were any local marathons or even half marathons that I could jump in. I came across the Mad River Marathon in Vermont which triggered a flashback to when I was scrolling through Instagram earlier that morning and saw Bart Yasso post a picture with his Mad Marathon bib.  Running celeb + a pre-planned route for my 20 miler….seems somewhat logical.  The 3+ drive to the race…maybe not so logical. Lucky me, my aunt and uncle have a house in Vermont and Delaware and just so happened to be in Vermont this past weekend so why not turn this crazy idea into a family visit and a long run opportunity.  The things us runners do to make crazy things seem reasonable and totally logical. Of course I had to call my mom to extend the invite because what’s a mini-racecation without her…and because she could totally win her age group if I just so happened to persuade her to run the half 😉  And once again, she agreed so within a few hours we had our stuff packed, picked up sandwiches for the ride and made our way to Vermont.  Nothing too crazy for a Saturday night but it’s always nice to just hang around watching the Olympics and chatting with family.  Our alarms went off at 4:30, my aunt being the wonderful host that she is made us coffee and we were on our way to Waitsfield in the rain.

Even though it was just a training run, there were nerves.  Once you hit double digits starting with 2..the nerves hit for me…I should just make my runs 19.9.  I made my way to the starting line and soon we were off.  I immediately scoped out potential running buddies that would be fun to talk with but no one was having it..which is pretty funny because when my mom says that after a race I always say, “Well of course not! They are racing!” but here I am, being put in her shoes of not having people that want to talk and she is right, it does stink!  I didn’t have too much time to dwell on it because after the first mile we were already climbing up the first of many big hills.  Having a running buddy was no longer on the forefront…surviving this massive hill was!  I did creep up behind two men and said “You guys look fun, I’ll stay with you guys.”… I am starting to think my approaching line is the reason why I couldn’t find a running buddy! haha.  Well despite how pathetic I sounded, we did stay together from mile 6 to 17! Notice how I said stayed together rather than talked…. those hills leave you breathless and fighting.  I think I said “goodness gracious these damn hills” far too many times. Now that I have complained enough…the course was insanely beautiful and the clouds hung low over the mountains because of the foggy and rainy weather.  There were not many spectators but the cows and sheep were pretty loud and did a great job cheering us on 😉  There were moments when I considered doing the entire 26 because I was hovering around 3rd and 4th place but my legs did a nice job reminding me that that was not a wise decision so at 21 I called it a day.  My rainy and sweaty self got right into the car with my mom and just like that we were making the 3 hour trek home.  Thankfully we found a little country store pretty early on so I could change and grab a drink and a yogurt.

Overall, it was a pretty strange way to crank out a 20 miler and it was certainly a struggle but it was an adventurous experience and I am glad I did it!

There is so much more I could add to this blog post as I scroll through pictures of everything I have done since Boston but I think I will save that for a different post….maybe even tomorrow!

View all posts by melissahine10

Thinking about start lines, dance floors and my frannnddss❤️🔥

One run at a time.

The Art and Craft of Blogging

The latest news on WordPress.com and the WordPress community.

Food, fitness, and most importantly running.